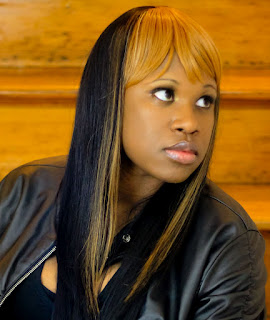 Born and raised in the Englewood Community on Chicago’s south side, Serenity Evans began singing and writing songs at a young age.

Her parents often played different styles of music and encouraged her to be creative. They enrolled her at the Boulevard Arts Center where she was taught to tap-dance by world renowned choreographer, Jimmy Payne. She also learned ballet and African dancing (the Katherine Dunham Technique) from modern dancer, Gheri Williams. She went on to take piano, drum, and flute lessons.

At the tender age of 4, her mother noticed her interest in singing when she walked in on Serenity belting out verses from Michael Jackson's "Man in the Mirror." Her parents cultivated her love of music by buying her a piano and she’s been singing and playing the keyboard ever since.

She sang in churches, plays, and talent shows and started recording in people's houses and basements. At the age of fifteen, Serenity and two friends formed a female rap trio called T-Sko. After making a few songs, her friends lost interest so Serenity decided to go solo and work on her own material.

Inspired by her favorite singers (Aaliyah, Michael Jackson, and Trey Songz) she began honing her craft and finding herself. She says, “I always wanted to be a singer but I just had to believe in myself." During her last years of high school, she worked in Mayor Daley’s Kid start Summer Choir where she performed at various schools and park districts with an R&B group called "One Chance."

She graduated during the recession with a Bachelor’s degree in Communications and a minor in Music. Unable to find a job, Serenity decided to devote her time to becoming an artist and worked with various independent labels.

A previous label that she worked with had a vision to make her be predominately old school. That was only a small part of who Serenity was as an artist and she no longer wanted to be kept in that box. While she was in between labels, she was stumbled upon by JHitzMusic who helped to cultivate her new sound and boost her confidence. She went on to record her first EP which boasts new styles of Hip-Hop/R&B and POP.

She says, "It was like he shared my vision, and everything that I wanted to accomplish."

Serenity Evans studied at Soulstream Music Studio and will be performing at this year's Soulstream Vocalist Showcase.